Anthropomorphic Rattan Chair (1943) by Jacques Dumond is a rattan masterpiece, the only model known is part of the collections of the Musée des Arts Décoratifs in Paris.

Anthropomorphic because it is based on the shape of a human back. Jacques Dumond’s son Dominique told us the story on how his father had the idea of this shape while playing on the beach. Dumond molded the sand to sit against–it was very comfortable so he decided later to create a chair from this concept. The rattan is a traditional material but happened to be the perfect material to shaped any ergonomic modern design.

In 1960, Joseph-André Motte won first prize, use of glass products in furniture, with his Elements 80 bookcase, a new system of modular  bookcase made of glass and wood elements.

Philippon and Lecoq won second prize with their glass desk in the same competition, 1960.

Son of Parisian ébéniste, Jacques Dumond (1906-1991) attended l’Ecole Boulle in 1923, then collaborated with the architect Pierre Patout from 1929 to 1934. During World War II, Dumond experimented with available natural materials and designed his celebrated Ergonomic chair in rattan in 1943 and exhibited at the Salon des Arts Ménagers in 1947.

The post-war period was a very intense and prolific one for Dumond. He was involved in Reconstruction projects with Louis Sognot through the International Exhibition of Urbanism and Living Environment in 1947. As a Member of the Union des Artistes Modernes (UAM), he and André Herman created Formes Utiles, a section of the Salon des Arts Ménagers dedicated to furniture and everyday objects of the house such as tableware.  And alongside Jacques Vienot, Dumond worked on the development of industrial design in France, establishing the Institut d’Esthetique Industrielle and becoming its Vice President.

Dumond was also avidly engaged in the promotion and use of new materials and new techniques; in the late 50s, he created a program called Material Concours to help promote their use.

Most importantly perhaps, Dumond taught and trained a whole new generation of designers in his role as Professor at the École Nationale supérieure des Arts Décoratifs (ENSAD). He collaborated with many key figures of this new generation, inviting designers such as Janine Abraham and Dirk Jan Rol, Roger Fatus, Etienne Fermigier, Philippe Leloup, and André Monpoix, to work with him in his studio, and encouraging them to participate in all significant national and international exhibitions such as Triennale d’Art Français in Paris 1956, or the Exposition Universellle de Bruxelles, 1958. 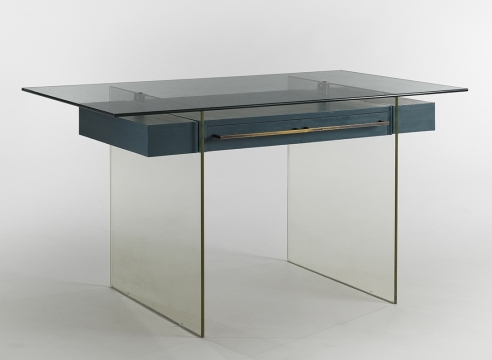 Jacques Dumond
Back To Top