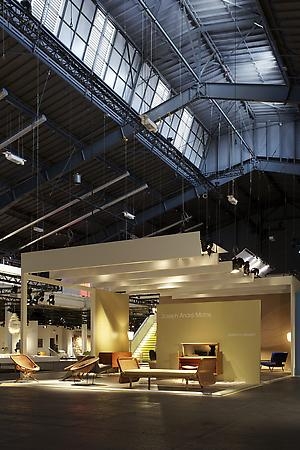 For Design Miami/Basel, June 14-18, 2011, Demisch Danant will present the first exhibition ever devoted to the work of Joseph André Motte (b. France, 1925), one of the most innovative and highly influential figures of post-war French design, whose contributions have until now remained one of the best kept secrets of Modernism. The Demisch Danant presentation will bring together more than twenty rare examples of Motte's work, most never before exhibited publicy.

J. A. Motte was a member of the young generation of French designers that emerged immediately following World War II and included Pierre Guariche, Michel Mortier, René Jean Caillette, Alain Richard, Pierre Paulin, Antoine Philippon and Jacqueline Lecoq, among others. Having trained in Marcel Gascoin’s workshop, Motte soon rose to the top of this new “school” of French design whose mission was to refurnish French homes in a resolutely contemporary style. His prolific work used all the new materials that industry made available, and he was a pioneer in many areas. His brilliant career was marked by prestigious commissions (including the Orly and Roissy airports, the Musée du Louvre, and the Préfecture du Val d’Oise), and he. and he was recognized with the most distinguished honors of the era.

Within an early 1960s-inspired architectural setting, the design of the exhibition will be structured around the contrast between interior/exterior and public/private space.

- Rattan furniture from the early 1950s, with a pair of the iconic 1949 Tripod armchairs and the less well known but equally successful 1952 Catherine armchair, as well as a very rare and elegant 1953 rattan bed.

- A 1958 interior with a collection of furnishings that were being produced at that time in series by Charron for furniture, Steiner for seating and Disderot for lighting fixtures, notably the luminous 1958 coffee table and the iconic 770 armchair.

- Finally, unique pieces made for a public commission in 1965.

Demisch Danant exhibition will give a glimpse of the extraordinary diversity of a designer who worked outside conventional
rules.